< BACK TO ROD'S BLOG 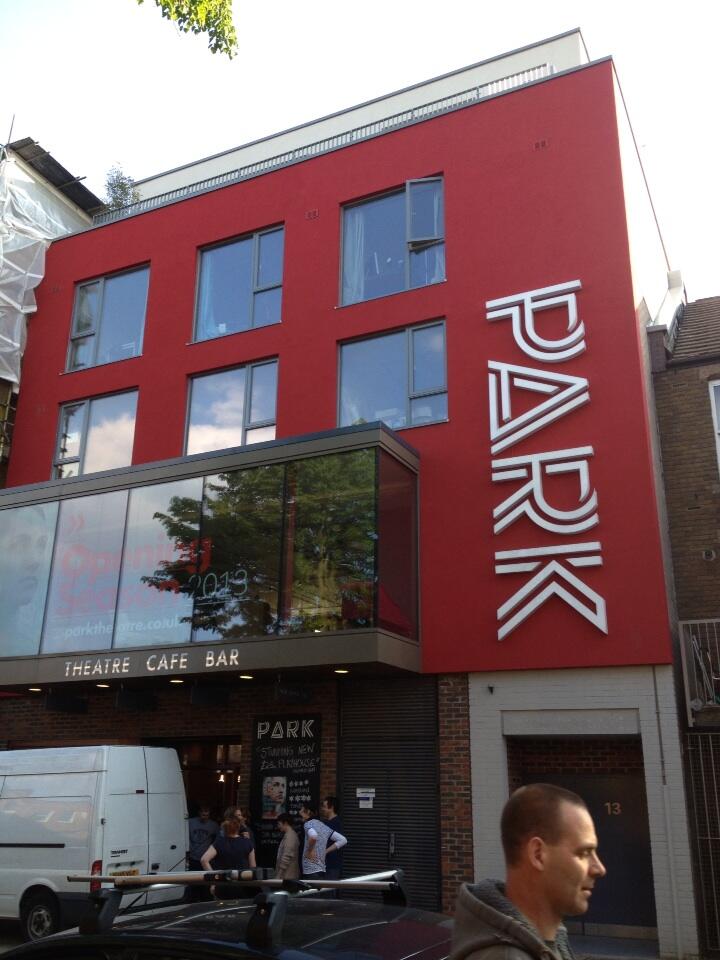 That’s that – ‘The Thing About Psychopaths’ ended a long and exciting national tour at Park Theatre – the brand new venue in Finsbury Park. I’d visited the theatre only a few weeks back and it was still a building site – so to get open in time for their first main house show and our visiting show (the first show in their studio) – was a remarkable feat. It must have been hugely stressful for Jez Bond and his Executive Director Miranda Bertram – as well as for Melli Bond who is not only the Creative Director but is also performing in the Park 200 production ‘These Shining Lives’. When we arrived for our get-in at the beginning of the week there were still workmen finishing off, painting, wiring and fixing. With only hours to go before opening it was obviously a case of taking everything to the wire!

The new building is ideally placed – just two stops from Kings Cross, the building is a few seconds walk from Finsbury Park tube and is beautifully designed – as you can see from the image above taken from outside the building. It was very exciting to be the first company to bring work into Park 90. We had good audiences all week with really positive feedback. I really hope we can return with more of our work in years to come.

The ‘Psycho’s team were brilliant – their performances got better and better. In Park 90 the play was intense and audiences were really close to the action. Comments on twitter throughout the tour have been really positive – such a great way of gauging what audiences think. Here’s a few:

Sunday with the #psychopaths @RedLadderTheatr pushed my buttons nice one Rod.

@RedLadderTheatr just watched ‘the thing about psychopaths’ and it was amazing. Thanks for a fab night! 🙂

@TheMaltings @redladdertheatr I thought it was an interesting play, well acted and an impressive set.

Very much enjoyed #psychopaths by @RedLadderTheatr last night. Great to see such a youthful audience too @HullTruck

Obviously – people don’t tend to Tweet if they don’t like a production – but there were many tweets like this throughout the tour . The reviewers were more mixed in their response giving the play 2,3,4 and a 5 star review. I think one of the fairest newspaper reviews came from Joyce MacMillan of The Scotsman who saw the play in a small audience in Dunfermline. Here’s a quote from |Joyce’s review:

“Rod Dixon’s production is a stylish and inventive affair, with impressive lighting and design, a powerful soundscape, bold use of movement, and a fine streak of poetry. And it features four strong, fearless performances from Shaun Cowlishaw (as Noel), William Fox, Babajide Fado and Kyla Goodey; that offers not so much a play, as a brief, single-minded nightmare vision of a society run by psychopaths at the top and psychopaths at the bottom, with the ordinary man or woman in the middle forced to mimic their dysfunctional behaviour, or be crushed.”

Meanwhile, in a light and beautiful little studio in the Nutclough Radical Roots housing cooperative in Hebden Bridge, Ella Harris has started rehearsing ‘Wrong ‘Un’, our one woman musical about a working class Suffragette. Under the excellent direction of Justin Audibert, the show, written by Boff Whalley, is going to be a massive contrast to Psychopaths. Ella has perfected her Nelson accent (that’s Nelson in Lancashire – she’s not impersonating a famous Royal Navy admiral), and as usual Boff has spliced together clever text with quite brilliant songs. The show is set in 1918 – at the end of the First World War as women of wealth and education were given the vote. In places the piece is very funny and light but when it needs to be dark and hard-hitting it is. After a particularly shocking description of life in prison Boff has written a beautiful song which gives the audience time to take in the details and experience the emotions of the character. I’m expecting sniffles and sobs from the audience at that point! The show will open at Leeds Big Bookend on the top floor of Leeds Library on June 9th and then it goes on the road to Hebden Bridge Arts Festival, Women’s Week for Unite the Union, Durham Miner’s Gala, Ramsgate Festival and the Unite Retired Members conference. After the summer the piece will take little jaunts out including a gig at Liverpool Lantern Theatre and The Garage in Norwich. In early 2014 ‘Wrong ‘Un’ is playing two nights at The City Varieties with support from a great musical duo ‘O’Hooley and Tidow. After treading those Edwardian boards Ella will perform in the south west from Cheltenham and Bath right down to Falmouth with gigs in Exeter and Plymouth in between.

If you saw ‘The Thing About Psychopaths’ after seeing ‘Sex and Docks and Rock & Roll’ this year – and you thought that was a contrast – then get to see ‘Wrong ‘Un’ and you’ll realise that Red Ladder’s work refuses to be ‘pigeon-holed’!!

About Rod: Rod became Artistic Director of Red Ladder Theatre Company in 2006, following his role as associate director at the Barbican Theatre in Plymouth. He has also ran The Hub Theatre School in Cornwall and been an actor with several companies including Kneehigh Theatre. Directing credits for Red Ladder include Where’s Vietnam?, Forgotten Things, Riot, Rebellion & Bloody Insurrection, Ugly, Sex & Docks & Rock ‘N’ Roll, Big Society! and Promised Land. Rod is both a life-long Liverpool supporter and a believer in Proudhon’s principles of anarchy – the two might be connected.
Contact:  rod@redladder.co.uk